From 5 August 2014 to 11 November 2014, a major artistic installation entitled 'Blood Swept Lands and Seas of Red' will see the Tower of London's famous dry moat filled with over 800,000 ceramic poppies to create a powerful visual commemoration for the First World War Centenary. The ceramic poppies are available to buy for £25 each from 5 August 2014 and the net proceeds, hoped to be in excess of £15 million if all poppies are sold, will be shared equally amongst a group of carefully selected Service charities.

The evolving installation by ceramic artist Paul Cummins, with setting by stage designer Tom Piper, will be unveiled on 5 August 2014; one hundred years since the first full day of Britain’s involvement in the First World War. Entitled ‘Blood Swept Lands and Seas of Red’, the installation is being created in the Tower’s famous dry moat. It will continue to grow throughout the summer until the moat is filled with 888,246 ceramic poppies, each poppy representing a British or Colonial military fatality during the war. The poppies will encircle the Tower, creating not only a spectacular display, but also an inspiring setting for learning activities, as well as providing a location for personal reflection. The scale of the installation reflects the magnitude of such an important centenary, creating a powerful visual commemoration. The last poppy will symbolically be planted on 11 November 2014. - See more at: http://www.hrp.org.uk/TowerOfLondon/stories/firstworldwar/TheTowerofLondonRemembers#sthash.TkeDuAXX.dpuf 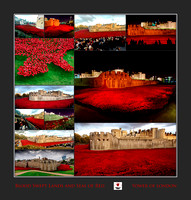