Visitors 51
Modified 15-Mar-13
Created 25-Jan-12
81 photos
The Royal Pavilion is a former royal residence located in Brighton, England. It was built in three campaigns, beginning in 1787, as a seaside retreat for George, Prince of Wales, from 1811 Prince Regent. It is often referred to as the Brighton Pavilion. It is built in the Indo-Saracenic style prevalent in India for most of the 19th century, with the most extravagant chinoiserie interiors ever executed in the British Isles.


The Prince of Wales, who later became King George IV, first visited Brighton in 1783, soon after achieving his majority. The seaside town had become fashionable through the residence of George's uncle, the Prince Henry, Duke of Cumberland, whose tastes for cuisine, gaming, the theatre and fast living the young prince shared, and with whom he lodged in Brighton at Grove House. In addition, his physician advised him that the seawater would be beneficial for his gout. In 1786, under a financial cloud that had been examined in Parliament for the extravagances incurred in building Carlton House, London, he rented a modest erstwhile farmhouse facing the Steine, a grassy area of Brighton used as a promenade by visitors. Being remote from the Royal Court in London, the Pavilion was also a discreet location for the Prince to enjoy liaisons with his long-time companion, Mrs Fitzherbert. The Prince had wished to marry her, and did so in secrecy, as her Roman Catholicism ruled out marriage under the Royal Marriages Act.
In 1787 the designer of Carlton House, Henry Holland, was employed to enlarge the existing building, which became one wing of the Marine Pavilion, flanking a central rotunda, which contained only three main rooms, a breakfast room, dining room and library, fitted out in Holland's French-influenced neoclassical style, with decorative paintings by Biagio Rebecca. In 1801-02 the Pavilion was enlarged with a new dining room and conservatory, to designs of Peter Frederick Robinson, in Holland's office. The Prince also purchased land surrounding the property, on which a grand riding school and stables were built in an Indian style in 1803-08, to designs by William Porden that dwarfed the Marine Pavilion, in providing stabling for sixty horses.[1]
Between 1815 and 1822 the designer John Nash redesigned and greatly extended the Pavilion, and it is the work of Nash which can be seen today. The palace looks rather striking in the middle of Brighton, having a very Indian appearance on the outside. However, the fanciful interior design, primarily by Frederick Crace and the little-known decorative painter Robert Jones, is heavily influenced by both Chinese and Indian fashion (with Mughal and Islamic architectural elements). It is a prime example of the exoticism that was an alternative to more classicising mainstream taste in the Regency style. 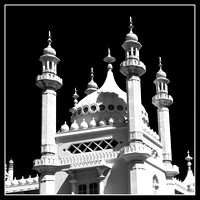 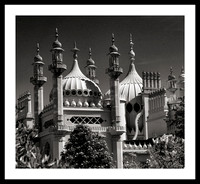 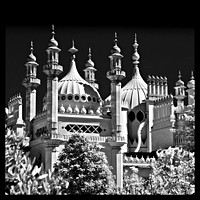 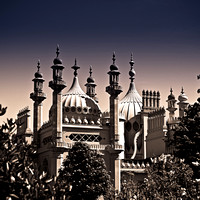 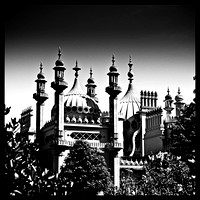 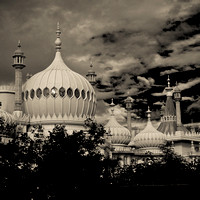 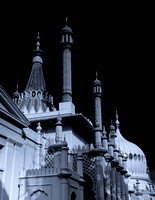