Visitors 90
Modified 19-Jul-11
Created 19-Jul-11
26 photos
In the first decade of the 19th century two brothers, Sir Charles and Walter Burrell, each commissioned John Nash to design a new house for their neighbouring estates of Knepp and West Grinstead in the Sussex Weald. The houses belonged to a group of fashionable Regency Gothic "castles", but their plans and setting, and ultimately their fates, were very different. West Grinstead, sold out of the family in 1912, became riddled with rot and was demolished in 1970; Knepp emerged phoenix-like from a devastating fire of 1904, and has recently undergone something of a renaissance in the hands of a new generation of Burrells.

Knepp came into the Burrell family through the brothers' mother Sophia, whose father, Sir Charles Raymond, had acquired it in 1787. A poetess and playwright, Sophia had married her second cousin, the lawyer, archaeologist and Sussex historian Sir William Burrell, who inherited the Raymond baronetcy from his father-in-law in 1788. There was no habitable residence at Knepp at this time, so they bought the Deepdene near Dorking in 1790.

The 1787 sales particulars described Knepp as extending to 1600 acres and having, near the upper end of its 80-acre "fish pond", an "elevated and beautiful spot, to build a house upon". When Sir Charles Burrell inherited it on his mother's death in 1802, he decided to make Knepp his home. To finance his new house, he was permitted by an Act of Parliament to sell the Deepdene (to Sir Thomas Hope in 1807), and other inherited properties. The Act stipulated that proceeds be spent buying lands in Sussex and building a family mansion at Knepp. Meanwhile, his brother Walter had inherited West Grinstead, which their great uncle, Sir Merrik Burrell, had bought in 1749. A prosperous merchant and governor of the Bank of England, Sir Merrik had re-established the Burrells in Sussex, buying back former ancestral lands.

There is some uncertainty as to the exact dates of the two Nash houses, but it is likely that West Grinstead, replacing an earlier house on a different site, was under construction by 1806. We know that by 1808 Nash had already designed "a mansion house and offices ...to be built for the said Sir Chas. Merrik Burrell on his estate called Knepp", because that year he was obliged to produce the drawings under oath in Chancery (being prone to falling out with clients). Nash estimated that it would cost "about £13,000 exclusive of the charge of the architect and carriage of materials, by comparison with an estimate of £12,625 for another house.......on a different site at Knepp of similar dimensions tho of different form allowing for the increase which has taken place in the price of materials since the first estimate was made". The affidavit suggests that Nash had been involved at Knepp for some years before 1808. 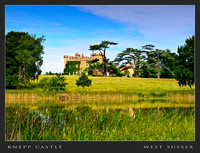 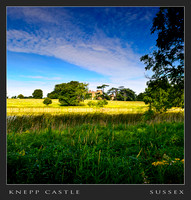 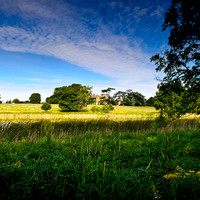 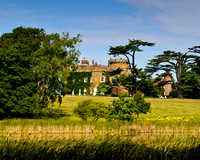