Visitors 52
Modified 30-Aug-20
Created 29-Oct-14
10 photos
Lighthouses are world famous. Often sited in spectacular locations, they perform a vital role in the safety of mariners in all weathers. The modern era of lighthouses began at the turn of the 18th century, as lighthouse construction boomed in lockstep with burgeoning levels of transatlantic commerce. Advances in structural engineering and new and efficient lighting equipment allowed for the creation of larger and more powerful lighthouses, including ones exposed to the sea. The function of lighthouses shifted toward the provision of a visible warning against shipping hazards, such as rocks or reefs. Winstanley's lighthouse at the Eddystone Rocks marked the beginning in a new phase of lighthouse development. The Eddystone Rocks were a major shipwreck hazard for mariners sailing through the English Channel. The first lighthouse built there was an octagonal wooden structure, anchored by 12 iron stanchions secured in the rock, and was built by Henry Winstanley from 1696 to 1698. His lighthouse was the first tower in the world to have been fully exposed to the open sea. The civil engineer, John Smeaton, rebuilt the lighthouse from 1756–59; his tower marked a major step forward in the design of lighthouses and remained in use until 1877. He modelled the shape of his lighthouse on that of an oak tree, using granite blocks. He pioneered the use of "hydraulic lime," a form of concrete that will set under water, and developed a technique of securing the granite blocks together using dovetail joints and marble dowels. The dovetailing feature served to improve the structural stability, although Smeaton also had to taper the thickness of the tower towards the top, for which he curved the tower inwards on a gentle gradient. This profile had the added advantage of allowing some of the energy of the waves to dissipate on impact with the walls. His lighthouse was the prototype for the modern lighthouse and influenced all subsequent engineers. One such influence was Robert Stevenson, himself a seminal figure in the development of lighthouse design and construction. His greatest achievement was the construction of the Bell Rock Lighthouse in 1810, one of the most impressive feats of engineering of the age.

This structure was based upon Smeaton's design, but with several improved features, such as the incorporation of rotating lights, alternating between red and white.
Stevenson worked for the Northern Lighthouse Board for nearly fifty years during which time he designed and oversaw the construction and later improvement of numerous lighthouses. He innovated in the choice of light sources, mountings, reflector design, the use of Fresnel lenses, and in rotation and shuttering systems providing lighthouses with individual signatures allowing them to be identified by seafarers. He also invented the movable jib and the balance crane as a necessary part for lighthouse construction.

Alexander Mitchell designed the first screw-pile lighthouse – his lighthouse was built on piles that were screwed into the sandy or muddy seabed. Construction of his design began in 1838 at the mouth of the Thames and was known as the Maplin Sands lighthouse, and first lit in 1841.[8]

Although its construction began later, the Wyre Light in Fleetwood, Lancashire, was the first to be lit (in 1840) 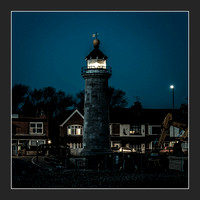 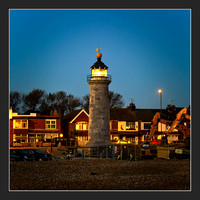 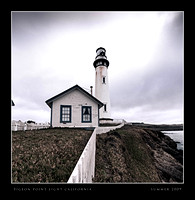 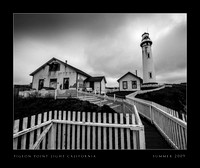