Visitors 63
Modified 10-Jan-16
Created 8-Jan-16
54 photos
January 2016 : RNLI Station at Selsey
This new photographic collection is our latest work taken on a rare sunny January day .. the 1950s Lifeboat house is an iconic view from the beach at Selsey .. In the foreground are lots of winch units in various states of decay which give such context to the Selsey beach scene . This collection contains black and white and colour image sets ..
History
The establishment of a lifeboat service in Selsey was in 1861 with RNLB The Friend;[5] she was launched from the beach by means of skids. For the station's first 25 years the lifeboat's Coxswain was James Lawrence. On his retirement from the service in 1886 he was awarded a RNLI silver medal in acknowledgment of his long and valuable lifesaving service, highlighting rescues such as those of the brigs Governor Maclean (1875)[8] and Sharah Ann (1871), the schooners Exel (1872) and Henrietta (1875), the barques Sueine Meinde (1878), and Tranmere (1883), and the schooner Kyanite (1881).

In 1925 work began on the construction of a new boathouse built on a piled platform with a gangway leading to it from the shore. The gangway incorporated a trolley track. In 1927 the boathouse was once more re-built to enable it to house the station's new motor lifeboat.

During the Second World War the station had a busy time. The Watson-class lifeboat RNLB Canadian Pacific made many trips to rescue pilots from fallen aeroplanes and was launched on service 50 times. In one rescue on the 11 July 1940, the lifeboat saved the life of Squadron Leader John Peel, the commanding officer of 145 Squadron based at Tangmere. He was forced to ditch his Hurricane into the sea off Selsey Bill after sustaining damage in a fight with German Bombers. Peel was in the water with just a Mae West life saving jacket, but he was pulled from the water by Canadian Pacific only minutes after ditching. Canadian Pacific remained on station until 1969 and records show that she went on 286 services and rescued 157 lives.

In 1952 and into 1953 the boathouse's substructure was improved and strengthened and the slipway was lengthened. In 1958 the boathouse was re-built as the old structure had become unsafe and unserviceable due to years of coastal erosion. The new station was built with reinforced concrete and the deep water roller slipway was re-configured to have a gradient of 1:5. The station was also given a new fabricated steel approach gangway from the shore. In 2011 the station celebrated its 150 years as a continuously active lifeboat station. The occasion was marked by the RNLI by awarding the station as a whole an award on Vellum which recognised the station's 150 years of dedicated service in the pursuit of saving lives at sea.
Currently the station operates a Tyne-class lifeboat RNLB Voluntary Worker (ON 1146) which is launched via slipway from the main boathouse which stands away from the shore on a piled platform. The station also operates a D-class (IB1) inshore lifeboat, RNLB Betty and Thomas Moore (D-691) which is kept in its own purpose built boathouse close to the approach gangway of the main station.
Selsey is due to receive a new 25 knot (29 mph) Shannon-class lifeboat after almost 32 years of service by Tyne-class boats, easily the longest of any station. 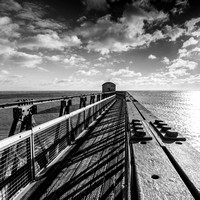 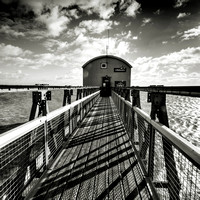